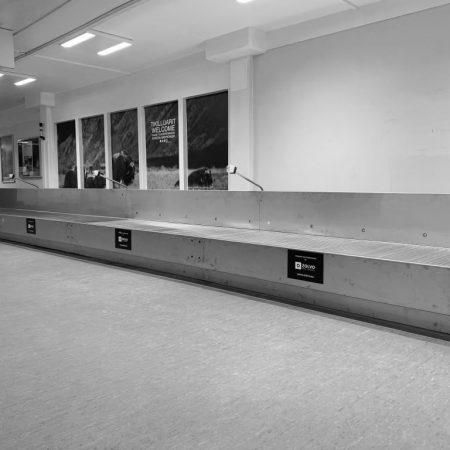 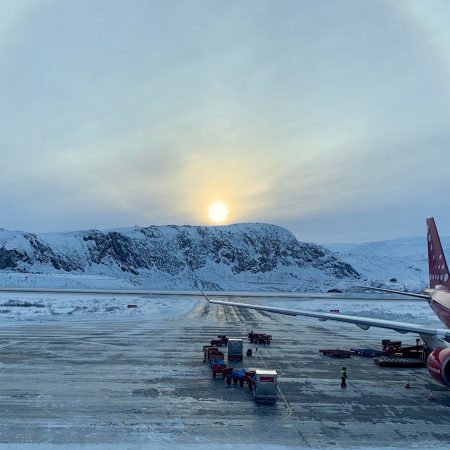 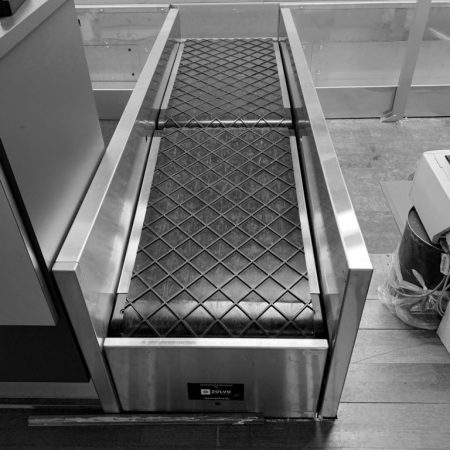 Kangerlussuaq Airport is a Greenlandic international airport located in Kangerlussuaq, Søndre Strømfjord.
Kangerlussuaq is Greenland's only major international airport. This is where the planes from the big world land and take off and it is also here, the small planes buzz like bees when they transport people and goods to and from the cities.
Greenland has an area of ​​2,166,000 km2 and has a total of 13 airports, where Kangerlussuaq is the largest and busiest airport for the country, serving 250,000 passengers a year.
Kangerlussuaq is located at the end of Kangerlussuaq fjord, Søndre Strømfjord, approx. 200 kilometers from the coast - just a few minutes from the ice sheet. The city houses approx. 550 permanent residents and all are more or less affiliated with Mittarfequarfiit.
Mittarfequarfiit, Greenland's Airports, handles the overall infrastructure for air transport of people and goods at the 13 airports in Greenland and is Greenland's largest workplace.
Kangerlussuaq Airport was founded in 1941 as a military base by the US Air Force. In 2002, the airport became a civilian airport.

Søren Langballe Jelager, Deputy Head of Security at Kangerlussuaq Airport, took up the position in the middle of a process concerning the replacement of the existing luggage facility.
"The airport had already initiated a process with Zolvo intra-logistics, in relation to the replacement of the existing luggage facility, which was gradually quite worn out."
Zolvo, which has previously been a subsidiary of Langebæk, under the name Langebæk Teknik, are experts in internal logistics and design, build and maintain all types of internal logistics solutions. Therefore, the choice was also made at the company Zolvo for the replacement of the old luggage facility and the construction of a new and much more automated facility. Zolvo is today a self-owned company, run by Mads Carlsen and Mads Lissau Jensen.

The task consisted of demolishing the old luggage facility and building a new one on the site, as there was no possibility of expansion.
"After the dialogue with Zolvo, where the practical things also came into place, it actually went pretty fast." says security chief Søren Jelager. "Zolvo was very quick on the trigger and they were in control of it all."

It is not an easy task in itself when the plant is located in Greenland. It takes a lot more than coordination and systems. Everything, and here everything is meant, had to be packed from home in Denmark, which was to be sailed to Greenland in containers.
“It is no use standing in Greenland and then you have forgotten some important tool - then it is a long way home to Denmark and creates a delayed process. So we had to pack everything down to the smallest detail and cross-check up to several times, if everything was now also packed and included in the total of 2 containers we sent to Greenland. ” tells a smiling Mads Carlsen from Zolvo.
“An exciting task indeed. Just having to pack the containers with everything you needed, the luggage belt, the building elements, tools and more, which naturally could not be bought in Greenland, was an insanely good exercise and proof of how dedicated we are to our work and our solutions. . ”

The containers arrived at the scheduled time and Zolvo began tearing down the old plant.
“The demolition went surprisingly fast. Already here Zolvo picked up time. They were so prepared and organized. ” tells the security manager at Kangerlussuaq Airport, Søren Jelager. “In just 3 weeks, Zolvo had demolished the old plant and built a new one. It must be said to be effective. "

The replacement of the plant has been a necessity. The old luggage facility was 20 years old and the luggage belt was 'eaten' in several places along the way and had experienced great wear and tear. Furthermore, spare parts for the old plant could no longer be procured.
“At Zolvo, we were in a safe collaboration. We had some ideas, they had some ideas and together we designed the exact luggage facility that suits our airport, on the square meters we had available and the work processes we have. ” tells the security chief. “Everything has been well organized and was done correctly and efficiently. The biggest challenge we faced after the plant came into operation was the employees who in the past had used manual work in some processes, just had to get used to the fact that large parts of it were now automated. It can, of course, put the plant in ‘doubt’, with the sensors scanning the luggage that an employee, for example, took the luggage out along the way. But it's a human habituation and I'm sure we'll soon get the benefit of resource savings we've been hoping for. ”

“It is only the imagination that sets the limits of what is possible. However, we are really good at finding optimal solutions to almost all logistical challenges. Our experience with different types of goods and products means that we know what it takes to transport and pack them efficiently. ” ends Mads Carlsen from Zolvo, who is currently working on projects at Copenhagen Airport.